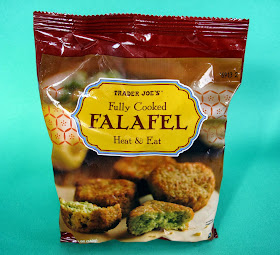 I'm an absolute falafel connoisseur. I eat it a lot. I was introduced to falafel later in life, so I guess I feel like I have a lot of catching up to do. The best part about falafel love, is that any falafel worth its chickpea will already be Vegan. My first falafel sandwich was from Sultan's Market in Chicago and I have to admit, it's still my favorite. So the bar is set pretty high.

I've never been gaga over pre-packaged falafel. It's ok, but it's usually dry or just not tasty. However, on my last trip to Trader Joe's, I noticed they had some frozen falafel. It's Trader Joe's, it's falafel and it's Vegan, what the hell, I guess I'll try it. You only live once! 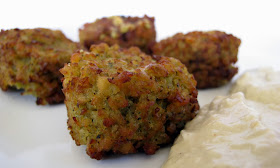 So right off the bat I notice the direction stating that the preferred method of cooking is the microwave. What? You almost never see that. The preference is usually the stove or toaster oven, but never the microwave. Well, I was smart about it. I put half of the falafels in the microwave and the other half in the toaster oven. That way I could determine MY preferred cooking method.

Well, I hate to say it, but the falafels were pretty uninspired. The texture reminded me of a reheated tater tot. Absolutely no moisture, no crisp, no crunch. I think the only thing that might have saved them is deep fat frying. Neither cooking method yielded great results. Yes, the microwave was quicker, but that's about it. And I thought the toaster over would make the falafels crispier but that wasn't the case. I'm so bummed!

The taste left much to be desired. Not very flavorful, you would definitely need hummus or something to spice it up. The only saving grace is that maybe I've had so much good falafel that the Trader Joe's Frozen Falafel never stood a chance. Whatever the case, buy at your own risk. I hope you have better luck than me!